Evolution of ageing & development of immunity: a tale of intertwined strands

Evolutionary theory predicts a rapid decline in the strength of natural selection with ageing and it might become negligible after the prime reproductive age is passed. Natural selection that optimizes organismal physiology for development and reproduction early in life can become too weak to effectively regulate the late-life performance in older individuals. This hypothesis is perhaps consistent with our previous studies with insects, where immune defense against pathogens turned progressively over-active and then nonspecific with ageing, increasing immunopathological costs and post-infection mortality. Also, immunopathological costs of early-life immune activation in juveniles are often paid at later life-stages, leading to faster ageing and morbid phenotypes. However, there are no direct experiments to test how age-specific changes in immune responses in populations are associated with their intrinsic rate of ageing and concomitant weakening of selection pressure beyond the reproductive age. To fill this gap, we used replicated populations of the fruit fly Drosophila melanogaster with divergent reproductive schedules and thereby evolving different ageing rates (e.g. ‘early reproduction-faster ageing’ vs ‘late reproduction-delayed ageing’). We tracked the changes in their immunity and post-infection survival throughout their entire lifespan (i.e. starting from the day of eclosion to their reproductive window and then until the 90 percentiles of their total lifespan). We found that populations evolving with an early reproductive schedule and accelerated ageing rate also showed early onset of immune senescence, characterized by overactive immunity with higher bacterial load and post-infection mortality. Interestingly, populations evolving with delayed reproductive schedules and slower ageing rates had lower immunity and higher infection-related mortality at early stages of their adult lifespan, suggesting slower development of their immune system. However, their ability to maintain a better post-infection health increased steadily until they reached the reproductive window and then declined afterwards. These results indicate that weaker selection strength post-reproductive prime can indeed be a plausible driver of immune senescence at the population level. 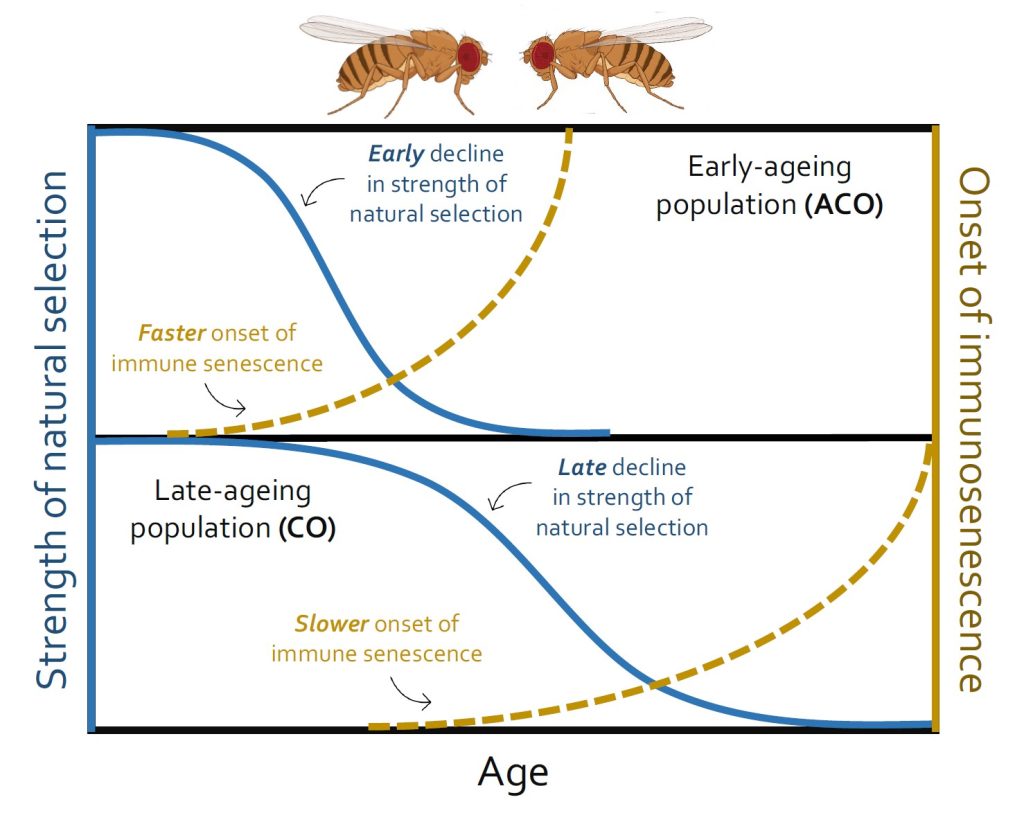