The genetic basis of behavioral variation in natural populations

The ability of an animal to interact with its environment requires the coordination of sensory perception, central nervous processing, and motor outputs. Given this multifaceted integration, how do behaviors evolve? We seek to address this complex genetic question using the blind cavefish, Astyanax mexicanus. A. mexicanus exists in a river-dwelling surface form, as well as in multiple populations that have been trapped in, and have adapted to life in, subterranean caves. Cavefish have adapted to survive and thrive in the cave environment, hallmarks of which include darkness and limited food availability, through the modification of morphological, physiological and behavioral traits. While surface and cavefish have strikingly divergent phenotypes, they are interfertile and are therefore a powerful genetic model of evolution. We have leveraged genome editing technologies to generate the first engineered mutations in surface A. mexicanus. We are using these fish to identify the relationship between the evolution of pigmentation, brain neurochemistry and behavior. Ultimately, the application of genome editing techniques in A. mexicanus will allow us to investigate the effects of specific genetic modifications on behaviors, providing unprecedented insight into how naturally occurring variation affects behavioral evolution. 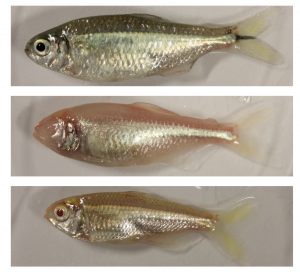