Social media gets a hard time these days, and in some instances rightly so. For the scientific community however, it’s a powerful platform for informal science communication and fruitful collaborations. In the wake of 2020, virtual communities have been a lifeline for scientists around the world. Unable to attend meetings, online platforms have enabled biologists to keep sharing their work, make new connections and strike up collaborations.

Between the Company, its journals and community sites, we have active accounts on Twitter, Facebook and LinkedIn, but Twitter is our go-to and together, our accounts are connected to 75k+ individuals. Here, we share news, discuss research, celebrate publications and commiserate grant rejections. It can be a supportive, informative and fun place that highlights life at and beyond the bench.

That being said, Twitter isn’t used everywhere and The Company of Biologists has been focusing its efforts on audiences that can’t be reached through the Twittersphere. One such audience is in China, where different social media platforms are used, and manuscript submissions and readership figures have been steadily increasing. So, in the summer of 2019 we launched a Chinese WeChat channel.

WeChat was developed and released by Tencent in 2011 and has since become one the most popular social media applications in China. Want to search for news articles? Use WeChat. Chat to friends? Use WeChat. Order a takeaway? Use WeChat. Pay for a meal before you even arrive at the restaurant? Use WeChat. The latest figures indicate that WeChat’s monthly users have increased to well over one billion.

Much like on Twitter, a lot of scientific discussion happens on WeChat, and many Western scientific organisations already have WeChat channels to promote their work. Given our relatively low profile and lack of a physical presence in China, we’re pleased with the growth of the channel so far and are excited to build a community of engaged Chinese researchers.

We publish articles on the channel once a week that highlight some of the many thing The Company of Biologists does, be it the latest research, interviews, posts from our community platforms, Company announcements, grant information, Workshops, Meetings – there is plenty to share. We’re also running a series providing advice to support Chinese authors in their publishing experience with us. Subjects in this series covered so far include a video about how to frame a research question, the process of submitting to all five of The Company of Biologists’ journals and tips on promoting research after publication.

We are fortunate to work with a supportive agency who assist us with the translations of our articles. Once the articles are published in local time, users can share content that they find interesting in WeChat groups and promote the article in the WeChat equivalent of Instagram Stories. 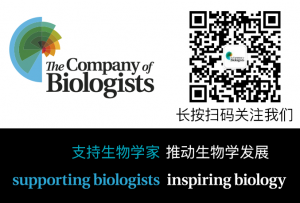