Sandra Bermeo, a PhD student at the University of Sydney, Australia took advantage of a Travelling Fellowship from the Journal of Cell Science to visit the laboratory of one of the best known researchers of Mesenchymal Stem Cell (MSC) biology, Professor Moustapha Kassem. 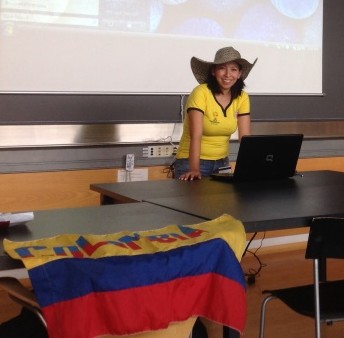 At Professor Kassem’s lab, KMEB  in Southern Denmark University Odense, Denmark, Sandra found that colleagues were keen to share their experience, demonstrate techniques and show how they approached experiments. She gained hands-on experience

of the optical image system IVIS Spectrum and the content image system Operetta. She also experienced the handling, knock in/down transfections and differentiation process of several primary cells and cell lines, such as mMSC 2.2, TERT4, ST2, Phoenix A, calvaria and mMSC, and the creation of a stable expressing cell line by retrovirus-mediated infection.

Sandra was able to continue the work of her research group, the Musculoskeletal Ageing Research Program, and gain further insight and inspiration. She performed a set of experiments to validate a gene as a therapeutic target, in this case for regulating osteoblast differentiation from MSCs. She was introduced to the IVIS Spectrum in vivo imaging system and colleagues explained the analysis and results of previous in vivo measurements.

Sandra was hoping to apply the protocol from her Sydney laboratory to detect osteoprogenitor cells in circulation by flow cytometry, but she found that the labelling pattern of the antibodies in KMEB lab did not allow her to mimic the protocol. Working with the team in Denmark, a new experiment was designed based on the antibodies she employed to identify the nature of the isolated cells.

The experience gained from Professor Kassem’s lab exposed Sandra to new techniques and created new contacts and connections. At the end of her stint, Sandra felt part of the team – something for which she feels very grateful.