Elevated cortisol alters the trajectory of hypothalamic development and function

Glucocorticoids (GC) are thought to be implicated in stress-related psychiatric disorders. Acute stress triggers adaptive responses allowing animals to respond appropriately to threat; however, exposure to chronic GC is associated with negative effects on the brain and behaviour in later life. This apparent dichotomy of effects exposes the question of whether the effects of GC might be temporally dynamic. It is known that environmental stress can increase organism growth rates but at a cost to fitness in later life. However, since few studies have taken a life-course approach, the developmental trajectory of GC-induced effects on the brain is unclear. In an optogenetic zebrafish model, our work shows that elevated GC causes precocious development followed by failed maturation. In GC-exposed animals, hypothalamic proliferation is initially increased, the hypothalamus is larger, and one of its associated behavioural functions, feeding, develops early. However, precocious development is followed by a rapid decline. In GC-exposed animals, excess hypothalamic progenitor cells fail to differentiate and proliferative radial glia are lost from the hypothalamus. This correlates with altered numbers of differentiated neurons, which are known to regulate food intake, plus suppressed feeding and growth. Our data highlight the developmental dynamics of hypothalamic neurogenesis following GC exposure and indicate that the hypothalamus is a GC-sensitive brain region. Alteration of hypothalamic neurogenesis is likely a mechanism through which GC exerts its effects on behaviour and its associated pathologies. 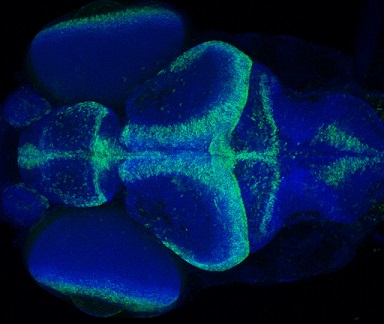