Institute for Perception, Action and Behaviour, School of Informatics, University of Edinburgh, UK

Sometimes unique insights into animal behaviour and its underlying mechanisms can be obtained by trying to build robot systems with the same capabilities. I will describe several examples ranging from simple orientation (e.g. chemotaxis) to more sophisticated navigation (e.g. central place foraging) in which we have tried to copy the sensory, neural and motor systems of animals in computational and robot models. A recent interest has been to explore insect equivalents of standard spatial cognition tasks used in vertebrates and humans and to look for solutions that are constrained by the limited processing power of the insect brain. A common theme that emerges from these investigations is that the spatial representation and cognitive processing required to behave successfully is often simpler than has been widely assumed, provided the system has the right sensory and motor interfaces to its environment. It is also interesting to contrast these insights to conventional robotics, in which ‘navigation’ is taken to be synonymous with construction and use of an accurate map. Do any animals, other than cartographers, meet this criteria? 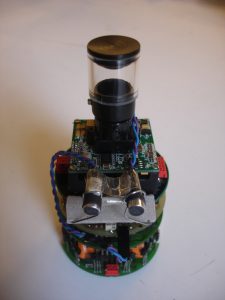