The consensus picture of spatial navigation in humans and other mammals is that, as we explore the world, we learn places (parahippocampus), record displacements and orientations automatically with an accurate path integration system (grid cells, head direction cells) and build up a metric Euclidean cognitive map (place cells), which is necessary for taking novel routes and shortcuts.

I would like to paint a somewhat different picture, based on behavioral experiments in ambulatory VR and previous literature. In practice, human path integration has poor resolution, is not automatic and is discontinuous, for the path integrator is frequently reset by visual landmarks. Navigators learn a network of paths between places, akin to a topological graph. They also acquire rough, piecewise measurements of path lengths and junction angles, incorporated in a labeled graph. However, this local information is not integrated into a geometrically consistent map. Consequently, novel shortcuts are highly unreliable and navigators are insensitive to large violations of Euclidean structure.

I suggest that spatial knowledge is better characterized as a cognitive graph, a labeled graph with local metric information, but no global metric embedding. Path lengths and angles may be noisy, biased by experience, and geometrically inconsistent. Apparently Euclidean behavior, such as selecting shorter routes, finding novel detours, and taking approximate shortcuts, can be explained by a labeled graph. Individual differences in navigation ability may reflect variation in the resolution of local metric information. A challenge for this view is accounting for behavioral effects attributed to egocentric and allocentric coordinate frames. 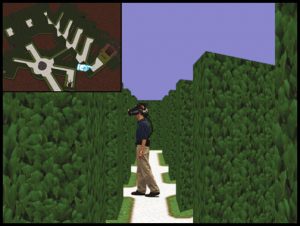